It's cooling off here in South USA. I know some folks look forward to Fall and Winter. Not I. Summer is my favorite. Give me muggy 100 degree days over boots and coats and steaming breath any day. Any day, I tell ya.

I visited the site of the Guidestones. It's all flat earth now. No sign of the massive monoliths. Just thought I'd share that.

My developmental editor, the inimitable John Jarrold, has finished his work and given his feedback on my edits and his response is overwhelmingly positive. He's made such gold-plated comments as
"This is working better now"
"Ausgan is definitely more interesting"
"Obsydia's dealings with Haik are more understandable"
"these changes add both interest and weight".
I know those words in themselves mean little to you, dear patient reader, but they lift my spirits through the ceiling.

He's voiced some ideas on how to tweak this big baby book further, to crank more personality out of the characters. I'm considering and applying those forthwith.

Next is line edits and my dilemma, as I've mentioned, is how to get this stage done quickly and effectively while spending less than a million dollars, by God. I just ran the document through a browser-based manuscript analyzer that promises to fix grammar. It had some hilarious results, and a couple of 'hooks' to try to get me to spend money.

So much data, and I don't know what it's suggesting. 90% fast paced paragraphs seems like a good thing, though, for an adventure story about monsters, magic, and murder! 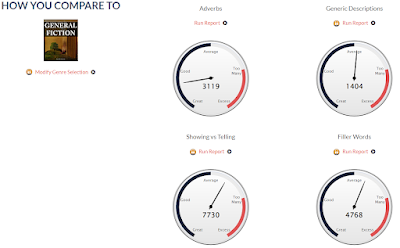 I find this one funny.
AutoCrit, "Adverb count is nice and low. But your Generic Descriptions, as compared to GENERAL FICTION is looking rough. And so is Showing vs Telling. And don't get me started on the loathsome Filler Words!"

me, "That sounds serious. Can you give me more info on that?"
"Yeah, as soon as you pay me."

It's almost as if generating intrigue, rather than ensuring document's wellbeing, is the purpose of the free version of AutoCrit. Hmm. 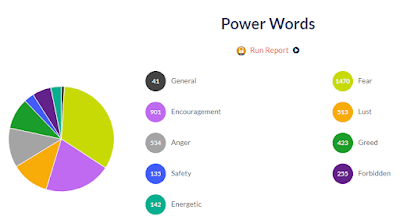 This one just baffles me. Power Words? Is that a phrase I should recognize? I use 255 forbidden power words? I don't think it means swears because the book has about 240 instances of f*ck alone. There are greedy and lusty power words? 1,470 fear power words?? I'm clueless.

This report is particularly useless. The book is 3rd person limited, present tense. But if a character remembers a thing, now we're in past. And if a character sees a root that might trip you if you're not careful, now we're emulating 2nd person, future tense.
Fact is, I'm going to need a human for line editing. I don't trust AI to respect character voice or a fantasy worlds or style.

With this cooler weather the yak industry is slowing down. It is holding steady for us though, what with the varying school start dates and Fall break schedules of the surrounding areas.

The fam and some friends had a little yak adventure the other day. We were out exploring an island on the lake and a storm fell on us. We had to take shelter in a cave. Not my beloved though.

We're gearing up for the Fall and Winter. Planning for different strategies and clientele. Looking into fishing kayaks and canoes.

I'm back into Stardew Valley again. This is a great stress-purging sorta game. I'm making a vineyard, like I do, and maximizing my farm's profit which feels somewhat antithetical to the game's whole point.

Still playing Elden Ring. It might be my favorite game. I rarely deem a game 'favorite' or even top 5. But this game... It's so good.
I see myself eventually buying one of those thick, official strategy guides. Not to learn to play better but to dig deeper in the lore and the bestiary.

Will the book be done? Probably not. But that'd be cool. Then you'd be able to read it. In reality, I'll probably make plans to slather the internet with it, then revert to my usual introvert self and not even mention it's released.