Welcome to News. News you can use, no less. For what is up to you. tp?

I messed up and read the 1975 historical fiction Shōgun by James Clavell. Amazing book. Loosely based on and inspired by actual English navigator William Adams aka Miura Anjin and James Clavell's own adventures as a WWII prisoner of war in Japan and Singapore. I say I messed up because it makes my own work look pitiful in comparison. 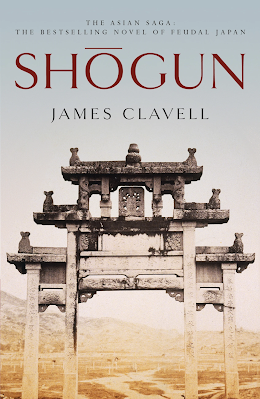 I loved it. Strong and varied characters. Gripping, if wandering, plot. Authentic world-building (but is it world-building if it's historical fiction?). A guy Wikipedia quotes called Shōgun "a virtual encyclopedia of Japanese history and culture; somewhere among those half-million words, one can find a brief description of virtually everything one wanted to know about Japan."
I'd only modify that to say "... about 1600s Japan."

Critique aside, Shōgun has done the evil deed of making me highly critical of my own work in progress. I think this was inevitable though. It doesn't matter how much I love the book I'm writing, if I sit on it too long my contentedness erodes. It needs to be freed. I'm making progress on that. Final developmental edits are done and I've given the manuscript back to John Jarrold for his perusal. After he's done his finishing touches I'll approach a line editor. Hopefully by that time the band will have made me some more dollars, because it ain't cheap to outsource edits on an eight hundred page book.

Lastly on writing, I figured that while John's holding the manuscript ransom and it doesn't behoove me to chip at it, I should start the next book. It had been a while since I simply wrote, particularly first draft / paving the road writing, so I was worried it might be hard or even insurmountable to write the 285,000 word sequel. But I opened a document and had a thousand words down in less than an hour. This is promising.

The business is up and running. If you're reading this, I need you to go like/follow my Facebook and Instagram pages, please! The more the merrier. Who knows, I might just convince you to rent a yak.

Made some progress on the automated booking feature of the website. It's brand new and needing feedback. If you have the time/means, look at it (on our webpage), try to book a yak and tell me how it could improve.

The Kingdom of Zeal

You know, the ol' paludarium. I've progressed this a bit - building the structure that will house the pumps for the creek / waterfall. Here comes a pic to tide us over. I don't share a lot of pictures because I know how "work in progress" this is, and how the potential is not self-evident.

Oh uncle Davey, it's been a while since Gaming made an appearance!
That's because it's been a while since a game impressed on me. Then came Elden Ring.
I'm sure everything of value has already been said elsewhere and more betterly than I can. I'll just focus on what I love. The world is epic. Monstrous things of all shapes and sizes are around every corner, and each is more violent and/or disturbing than the last. The setting is incredibly unique and varied throughout. You might find a cave opening in the corner of unassuming ruins in the middle of nowhere that leads to the most mesmerizing game environment you've ever seen. Firstborne was playing over the weekend. He got to a new area and said "I've said this like twelve times surely, but this might be the coolest place I've found so far."
The game gives you ultimate freedom to explore wherever you want, ignoring whatever main quest there is as you please. This means you can just as easily wander into low-level goblins (who can still murder you if you take them lightly) as a dragon that could one-shot you even if your level was doubled. It really raises the stakes of exploration, while making it worthwhile with the items and experience you gain doing so.
I won't call it perfect, but it has been a long time since I played so immersive a game.

Yak biz will be in full swing. We might even have a new webpage by then. I'd imagine edits will be back from John, and I'll either be applying fixes or have handed it off to a line editor. P'raps Zeal will be full of life.

I'll see you then