I've been stuck editing chapter 25 for weeks. Frustration has been mounting. I couldn't figure out why this is so hard considering I crushed 21-24 since the beginning of the year!

Well I finally figured it out, and maybe by sacrificing my own sweat and tears I can save you some. I know you love hoarding sweat and tears. Weirdo.

Scene 25 was destined to be the lowest point for a couple characters, including the scene's point of view character. But while I was trying to wring emotion out of her and the other sufferer, I kept not caring. I kept looking at her like, Quit your crying. No matter what combination of words I strung together to convey "She was sad," it just never convinced me. But why?! She's proactive, cunning, skilled. She's ambitious and does heinous things to succeed.

Obviously this is a problem. If I don't care, then the reader definitely won't. My inner troubleshooter went to work.

*Just general apathy
~the homeless guy you passed in your car. You pass, he's gone. You'd like to care but now you can't even remember a single detail about him. This isn't the case for this character. She's integral to the story and constant throughout.~

*You don't know them
~Wait so if I understood her better, I'd care more about her pain? Hmmm. Feels applicable to life. I think we've struck gold.~


Her personal stakes seemed obvious in the outline and so I expected them to shine through via her actions and reactions. I'd written her with that in mind, never actually "telling" the details of her grand scheme. I reasoned,
-I don't want to spoil things for the reader.
-There are things happening that even she doesn't know about. Things very close to her. So I'll keep stuff vague.
-The reader will be intrigued by not knowing what dark secret she's up to.

-It's not a spoiler to reveal her plan. It's not hand-holding or a waste of words. It's not "telling" vs. "showing." Her plan does NOT work out as she intended. How disappointed would readers be to learn not only that her dark secret isn't coming to fruition, it's never even revealed!
-Keep stuff vague to her that is ACTUALLY vague to her. Of course she knows what she wants, or else she's ineffective and a bad character.
-Readers aren't intrigued by characters with misty motives. They're indifferent, as was I.


THE PROBLEM
I wrote her scenes always just assuming her motive, never ironing out the details of it. At best I'd write a note - "Make sure you establish this aspect of her character in a previous scene". And so when payoff came, her grief did not matter.


THE FIX
I needed to establish in concise language her Conditions For Success. There are four. I wrote them out. Each is simple and straight forward. After that I went through her POV scenes in order (there were six previous scenes to touch), and mentioned each of those points in every scene, progressing them, regressing them, whatever, at the very least bringing them up.

When I made it back to scene 25, it wasn't just easy to fix but enjoyable. This scene isn't just the low point for her and another character. It is integral for several characters, for their arcs, and a crucial turning point for the story at large.

This has become one of my favorite scenes, and there's not a damn drop of blood in it. Always weird when that happens.

I'd love to visit this blog more often. I miss talking to folks and expressing myself here. As I hinted at in the last post, I haven't been around because kicking it here isn't vital to finishing the book, and the book is priority #1. I also mentioned having zero interest in reviving Silexare.com at this moment. I'll have to aim that url here in the meantime...

That said, this blog needs some major comment control.

I showed Regarding Silexare some love the other day (Not sexual, you freak! It's a blog, not a folded up pillow with a silky pillowcase. What's wrong with you).


Anyway, I was making love to my blog the other day and all of a sudde-BOOM! Comments galore,  all over my face, each one no more authentic than Donald's skin tone.

So I'm re-enacting Captcha or some such prophylactic. I'm sorry for the inconvenience. If this makes it impossible for you to comment here, you can still catch me on one of the social media websites where I waste my time.

I'll see you 'round.

Been a while, I know. That's because this blog doesn't presently serve any practical purpose. I don't have time to conversate here so it's sorta in a purgatorial state, like space dust just hovering and awaiting the press of gravity to squeeze it down into a fat juicy orang-HEY! One day is upon us!

I ran updates on plug-ins for http://Silexare.com/ and managed to break it.

Since I have as much interest in web dev as I do in studying the Ptolemaic system (which is freaking RIGHT by the way) the illustrious Regarding Silexare will take center-stage and present this month's news. On that note, don't click half of the links up there. They're broken, too lol.

Until right now, I believe I've only missed one monthly news posting since 2015. Maybe 2013. This includes the months after my daughter died. But am I reeling after Silexare.com's untimely misstep? Not even kind of. I was sick of it. It had become increasingly clunky and had terminal issues not limited to the Modelovirus which is killing the sobriety of hundreds of hundreds, even as we habla.
If nothing more, it served as time capsule for my personal comings and goings, but in the grand scheme even that didn't amount to much. I'll see about reviving it eventually.

WRITING
My last post here was in July of 2019 and it mentioned I was beginning to puzzle out the editing process. I'm deep in it now and almost done with book 1-or-2 of 2. I'm on scene 25 of 31. January has been quite productive for edits. After I finish editing book 1-or-2, I'm either sending it to a beta fish reader or jumping ahead and pitching to my target hybrid publisher. I'll simultaneously start edits on book 2-or-1 (also of 2).

I toyed with the idea of giving you specifics on the scene I'm working on but I chose not to. If you're interested, by all means hit me up in the comments. You might convince me to expound on it in a future post. I'm just becoming more conscious of my time. There is too much ground to cover for me to spend it doing anything besides progressing directly forward.

But David, you're here writing this. 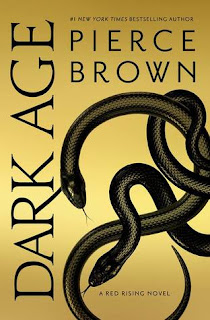 I just finished DARK AGE, by Pierce Brown. It's taken me two months, and not just because it's a thousand pages long. I have mixed feelings. First of all, holy hell. The whole story is on an EPIC scale. It takes itself exactly as seriously as Red Rising. 5/5 stars on complexity and world-building alone. I never would have thought while reading Red Rising that this story would become so in depth.  So broad. So convoluted.

There are one frdxillion characters and families and bloodlines and races and traditions and weapons and cities and planets and systems and armies and names and names and names. Throughout reading Dark Age I topped out at 80% comprehension of what was going on. I went back and read a good bit of the book twice and still was never fully confident I knew who was what or where or why. It's been less than a year since I read the previous novel, IRON GOLD. I should not have been this lost.

Oh that's normal, I was lost too hahaha! Hail Reaper!

Sure, except certain massive plot points including the last paragraph of the book lost all punch, leaving me looking much like
Even with that said, it's a 5/5 book. There are deep thoughts and quotes throughout. The absolute coolest scifi fights and battles and wars ever. Prose is relentless, clever, and concise. I was inspired throughout and embarrassed by the pitiful stakes of my own stupid idiot book for morons.

WATCHING
(This gets spoilery)

What about it drew me in so much? Yes, I like the character of Joker. Maybe more than any other DC character. Maybe even more than any Marvel character, too. But this is no action-packed superhero/villain flick. It's a depressing downward-spiral documentary close-up character piece of a mentally unstable grown man who losses all support, abandons his meds, and experiences the final tragic events that tip him over the edge of insanity, wherein he becomes a fully unapologetic sociopathic murderer, utterly disconnected from societal expectations or concern for consequences. The protagonist of the film becomes an "active shooter."

I can never truly know what this film did for or against that tragic trend. Maybe nothing. But I choose to believe that maybe a person heading down a similar violent path will experience a showing of Joker, catch a bit of Joaquin's depiction of the deranged Arthur Fleck, and then maybe, instead of arming themselves with the tools to murder innocent masses, they'll say, "Wait. I'm not alone?"
And then, just maybe, they'll choose to do something else.

NEXT MONTH
Maybe I'll have revived Silexare.com. Maybe not. I hope I'll have finished editing book 1-or-2 because there is a lot to do.

Gosh, usually i just go like [signoff] and Silexare.com would make a thing talking about where to find me elsewhere online. Sorry. Figure it oot.
Posted by David T List at 12:06 AM 2 comments: