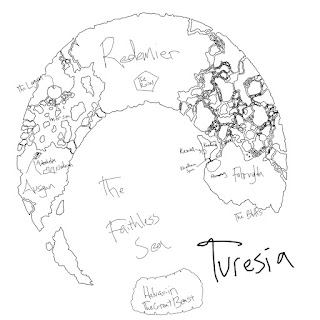 I feel like a broken record when discussing my work in progress. I've been writing this story for 3+ years and the end is not in sight. This has to be the most complicated f-ing thing I've ever attempted. I've strongly considered just putting it down and starting something new. In fact, that possibility isn't all the way off the table.

So, to shake out the dust and maybe air out these ideas a bit, I want to discuss some details of the story. I'll do so without being spoilery if I can help it.

By the way,
Yes, I know this post will perhaps entertain very few.
It's regarding a story that's not yet published, about an island that doesn't actually exist, with characters and magic that have never been introduced anywhere, and situations that might shift before their final written form. So, maybe this one's more for me than you. Maybe I'm just getting a head start on the final style sheet.

That said, here are a couple of characters and terms and locations! Most everything that's a hyperlink goes back to the Silexare Compendium, where I've already documented some things.
Also, feel free to go check out my Pinterest board for Ausgan, with images for reference and inspiration.

Kale - a young exemplar who lives in Erudition, with the other exemplars. A bit of a trouble-maker, but perhaps that's because he's a bit neglected.

Exemplar - Individuals deemed to be receptive to Consonance. They're plucked from the general population of Ausgan shortly after birth and brought to Erudition to train as monks.

Consonance - A song to the Imalasial, unique each time it is sung. Its purpose is to beseech the Imalasial to lend their powers to alter some aspect of the environment. These alterations include, but aren't limited to, heating, cooling, drying, humidifying, or exciting. The song has three parts - summoning, channeling, and negating.
The study and discovery of this song is the lifework of Yntemrus the Sovereign.

Yntemrus - The ruler of Ausgan, who dwells in the highest tower of Stravhelm. He began writing Consonance several centuries ago. Through research and study he has built a system of beliefs around it, testing how far he can bend the rules that govern existence, making weapons of the wind and the weather. His belief is that Consonance is the vital weapon for when the barbarians of Fohrvylda finally overflow their bloody homeland and cross the Faithless Sea to wage war on Ausgan.

The Faithless Sea - The body of water nearly enclosed within the islands of Turesia. It is surrounded in the west by Ausgan, the north by Redemier, the east by Fohrvylda, the south by (supposedly) Haluaviin.
It's called Faithless because its current changes with no warning. On one day the current may flow westward. The next it might flow eastward. The villagers of Ausgan believe the current and tide are determined by the motion of a great sea beast, known to them as Tidamora.

Okay. You still with me? Good. I'll leave you with that.

If my comment section overflows with requests for more lore, I'll post more.
And if frogs grow wings, they won't bump their butts each time they hop.