I chose IngramSpark as a print-on-demand (POD) company August of last year. IngramSpark is not the only POD option for independent publishers. It's not the most popular, either. Its strengths include reduced rates on printing services since it belongs to the printing giant Lightning Source, who prints most books in the USA. Also Ingram claims to produce better quality products since, again, they make use of Lightning Source's tools and printers.

They're less popular because they're newer to this game, while Lulu and Createspace have been at it a while. Ingram's interface and upload process are stricter than others, and not the most user-friendly. Also they'll only deal with publishers, not individual authors. That's why I founded Sky Island Publishing.

Since August IngramSpark has printed and distributed my debut novel, A Sawmill's Hope, in paperback and hardback. The books look clean and professionally printed. At any time, I can go online and place an order similar to the following - 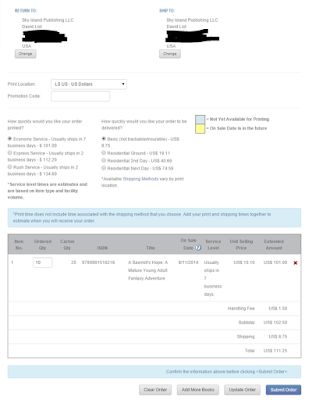 As you can see, price per book at this rate comes to about $11. That's a hardback book that I can sign and sell for $20 or $25. Or even $15. And the more I order, the better a discount I get per book. The order is printed and shipped quickly. Even quicker if I want to come off extra dollars. I'm impressed with IngramSpark for this.


Unfortunately, that is not what motivated me to write this post. But I figured if I'm about to shit all over the company, I'd better give an honest story, not just the bad.


In addition to printing, IngramSpark also distributes my books to numerous online stores, most importantly Amazon.com. Unfortunately A Sawmill's Hope, paperback, is not currently available through Amazon.

It has been "Temporarily out of stock" for some time. I don't honestly know how long and I have no idea why. When I noticed this, sometime mid-August, my first inquiries were to Amazon, who promptly replied stating they'd already placed an order to Ingram for more books.

So, I contacted IngramSpark via email. I didn't hear back so I tried again. For two months I wrote them. Six unanswered emails later, I called customer service. It was a thirty minute wait, and that's fine. I understand I'll have to wait for phone support no matter who I'm calling. But I don't often have time to sit and wait. I spoke to a representative who assured me they were hiring more people and soon they'd be able to return emails. (Because responding to your customers isn't currently a priority?)
Regarding my unavailable book she just needed to "check on a thing... ah, yep. Ok. Yeah, check back in a couple of days."

Whatever information she was trying to convey to me fell flat. It sounded like a switch needed to be flipped and that would fix everything. She couldn't answer me when I asked how we would avoid this situation in the future.

That phone call happened two weeks ago today. And the book is still unavailable.

I'm giving them a week from today then I'm pulling my paperback off IngramSpark. I'll print it through CreateSpace. This is November, a month I should be focusing entirely on writing 50,000 new words, not shopping for a new POD company. At this moment I'd like to make plans to remove IngramSpark entirely. They've communicated through action how important I am not to their business.
Unfortunately, no one can compete with their prices. $11 for a quality hardback is incredibly cheap. And one reason I chose to self-publish in the first place was so that I could have large, high-quality, illustrated hardback books. Books that a young me could fall in love with.

I was motivated to share this for a couple of reasons. I am feeling powerless and pissed off. But more importantly, I believe my visitors have something to learn here, especially those who are torn about which POD company to use. I've sang IngramSpark's praises for long enough to offer some criticism.

If I were employed by IngramSpark, I'd be riled by this post. In the hell-hath-frozen chance you are associated with IngramSpark, I'll address you directly. Except if you had listened to me by now we wouldn't be here.

You should have responded to my emails. No matter what the response was. Even if only to say "We're extremely busy and will get to your issue as soon as we can. For quicker service, give us a call." But you didn't. For months. Even when I CC'ed international support or sent from an alternate email address, still no response. If that's not a good way to contact you, update your contact information to reflect it.

When you promised to make my book available, you should have followed through. That's your side of the deal. That's what I pay you for. At first, and for almost a year, it was that way. Then it stopped and I still don't know why. But when I made you aware of the problem, through emails and phone calls, you should have fixed it. You've had plenty of time to send Amazon some books to sell. Now if people want a paperback of my book, they're shit out of luck.

If a solid alternative to printing quality hardbacks for cheap comes available, I will jump on it. I'll pull all titles from your company and bail with nary a backward glance.

I have big plans for my books and my brand and Silexare in general. The parties I do business with need to be able to accommodate. I don't know how many people were denied a book because of this. Maybe none at all. But you've indicated your level of commitment to my cause and it is unacceptable.

You fix your system, and I'll be happy to party with you.