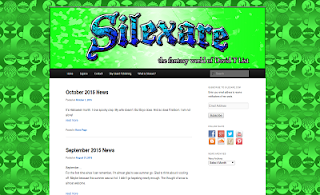 I'd grown quite sick of how boring both sites were but I am absolutely balls at designing websites. What you see is what I came up with. I like it. For now.

I mentioned this elsewhere but I'll expand on it here. I have a YouTube channel that I'm not exactly flooding with content. I'd like to post all sorts of things there... including Let's Play videos. For the uninitiated, I'm referring to videos of people playing video games.

Sound lame? Maybe it is. I can't defend the practice as a whole, only what it's worth to me, from a content consumer and content producer's point of view. I'll make sure to ramble way too much. You're welcome.

First as a consumer -
Once, I had a job working second shift in an office setting. Nothing really happened after 6 pm. It was a struggle to keep busy. If I had ongoing projects, progress couldn't always be made, largely because everyone else had gone home already. Then again, sometimes I could work on projects from my office or the adjacent workroom. Either way, it was me and that office. Together forever.

Sometimes I listened to music or podcasts or audiobooks. But I preferred to have Let's Play series playing, whether I could watch and listen or just listen.

I've always wanted to play Final Fantasy VII again. I love the music, the atmospheres, the characters (most of them), the story (most of it). But I know for a fact I won't. The gameplay is not its strength (I mean, let's be honest.) I put well over 100 hours into that game when it came out. If I try to replay it now, it won't be the same. I'm okay with that.


(The Remake, however, is another story.)

But what I can do is find a gamer on YouTube with half a personality and watch his playthrough as I go about my bizz.

With my current work situation I don't have that particular space to fill anymore. But when I sit down to watch something I still prefer YouTube over most alternatives. I'm utterly disillusioned with cable TV. And I'll be damned if that's not an entire post in itself. Perhaps one day I'll clean it up enough to post. We, at my house, subscribe to various streaming services. But there aren't many current shows that hold my attention.

The redeeming factor of good YouTube shows and channels (for me those include, but aren't limited to, Markiplier, Game Grumps, the Completionist, ProJared, JonTron, Game Theorists, Smooth McGroove, Games Done Quick, Jonny Atma) is that the hosts have amiable personalities (occasionally downright hilarious), they post somewhat regularly, and some of them play/review/discuss games I either don't have time to play or was considering playing myself. I don't necessarily watch all the content of those channels, and those aren't my only subscriptions. But there's more than enough to keep me busy.

Another plus is that I don't have to be sitting on my couch to view them. I can be taking a dump, or on my lunch break at work.

As a producer -
I want to replay some of the games of my youth. In fact I need to. The art, music, and concepts of those games were some of my earliest inspiration. And I value inspiration. Some older games are downright therapeutic (I'm looking at you, Tetris) or they remind me what I initially fell in love with about fantasy, monsters, heroes, music, art, etc.

I'm going to play them again. Because why wouldn't I? And now I'm in a position to reflect on them and record it all, for someone else's amusement or inspiration.

I bought a decent webcam and mic and rigged up some screen capturing equipment. Last week I played through a game. I'm in the editing stages.


Actraiser, a Super Nintendo title that came out in 1991. I chose it because I like it, I can beat it, and it's short. Not unlike one of my other favorite things.

Regarding the edits and preparation: I'm outsourcing some of the process to Firstborn. He's taking digital technology classes in high school and he offered to help. I'm TRYING my hardest not to influence or micromanage his work.

Unfortunately I don't have a lot of time to record videos. This is a process I need to do alone. Having Boyo or Wifey or even Firstborn around would be distracting for me and it would reflect in the quality of the video. Alone I have the freedom to act as if no one in the world is watching. Which, I guess, is a little ironic.

I can't mention all this without giving a shout out to my amigo Drew Cochran (who built the Silexare Compendium). He posts gaming vids, too. Mostly he streams to Twitch in real time.

His website, LegendaryFail.com, will catch all my gaming vids from YouTube, and his vids from Twitch (and possibly more) and house them all in a nice orderly manner.

Let's see how this goes.