I bet my old lawnmower was a champion early in its life. It was still pretty great when I got it used five years ago. But it's mowed a lot of lawn. Now, in short, it is a piece. But I'm cheap and I do what I can to get as much use out of a thing as possible. That said, I've brought the following on myself. So although this is mostly griping, there's silver lining. Just hold on. This post is insight into my creative process.

When you start the lawnmower, it needs to warm up for about 5-10 minutes before running at a functional capacity. For this reason I bent a rusty piece of metal around the handle so I could crank it then go clear the yard of chairs, limbs, stones, toys, and all other non-mowables. 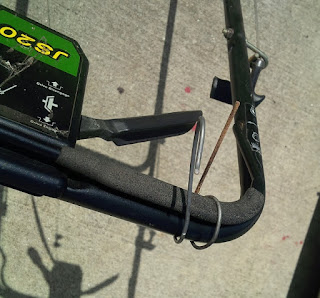 The plastic tubing that once shot mulched grass out the side of the mower broke long ago. Now the flap remains closed and cut grass just packs into the inside of the mower. The remedy for this is to pause every few minutes and pound the front wheels against the ground to clear it out so it doesn't clog and sputter to death. 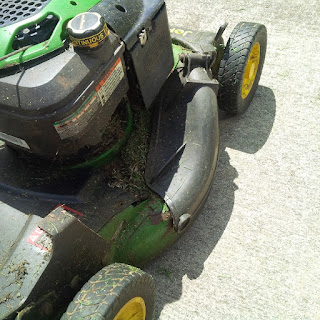 The auto-drive feature failed sometime last summer because a steel cable broke. When I repaired it (read: rigged it), the cable lost some length and is now housed outside its original shielded tube. To get auto-drive to engage, you have to lift up on the handle or physically kick the exposed cable. Don't ask how I figured that out. 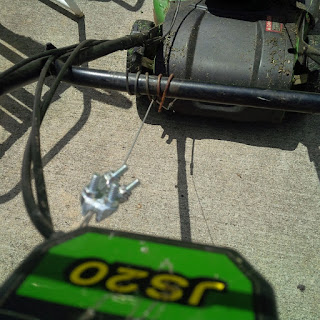 Most of the time I'm cutting grass, it's early afternoon, so that the sun has had time to dry the dew off the lawn. This takes longer in NE Ga because the humidity level hovers at around 800% to 900%. By then it's 95-105 degrees American, wind levels of 0.01 miles per hour. Wearing socks and shoes and shirt I'd have a heat stroke in about 3 minutes. So I wear Chacos and shorts. Unfortunately I have more fire ants in my backyard than there are hydrogen molecules in the universe (true fact). So if I can get the yard done with only 10-20 ant bites on each foot I'm doing well.

David, this sounds miserable. Why don't you hire a dude to cut it? Or get a riding mower? Or get someone who knows what they're doing to fix your lawnmower? Poison those ants? Or put on shoes? Or act really sick until your wife cuts it? Or pave your yard with cement and paint it grass green? Or invent an aberrated form of grass that strangles weeds, thrives on the blood of ants, and never grows beyond 3/4 inch tall?

I could do all those things. Eeeaasily. But I choose not to because despite all the BS I like it.
I like cutting the grass. And I like thinking about how engines work.

I've worked out more plot details and built more worlds while cutting grass than anywhere else. Something about a task that requires some but very little actual brain capacity gets my creativity working overdrive.

It was while I was cursing ants and considering deeper implications of ant bites that I worked out the details of the Redcap goblins (not their final name). Such as:
Their relationship with nearby humans (devour them all)
How they perforate the Halandor mountains with their endless tunnels
How their scouts drink their liquefied brothers and sisters, never sleep, and fear sunlight
How their queen is eternally pregnant until the moment she dies and how her daughter will be born pregnant as will her daughter and her daughter's daughter
How King "Sky" Tiverus, whose kingdom is nestled in the same mountains the goblins own, has made a fragile pact with the Redcap Queen that if he continues to supply secrets of mankind, she'll continue to have her goblins delve into Silexare's crust to barter with Calderites for custom crafted Lahuvian steel so that King Tiverus can one day build the theoretical vacuum-chamber airships.

I wouldn't give up these revelations for anything. Ant bites, heat stroke, and shite machinery are worth it.