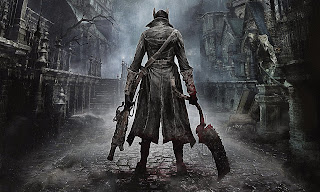 I did it... I bought Bloodborne for Playstation 4. It's my favorite game for the PS4 so far, with Shadow of Mordor a close second.

I'm not one for reviews. They typically require more structure than I'm willing to succumb to. So instead, here's my own take on Bloodborne.


I heard it was hard. "You die a lot." That's what I know about it. And so I begin. A quick intro clip reveals little to nothing as far as instruction or back story. That's fine. I climb off a bloody table where human evisceration seems to take place. I find an enemy. It's a lycanthrope twice my size. It hastily claws me to death. I come back to life and find a saw blade mounted on a curved wooden handle, not unlike a straight razor but more likely to casserole your face. I return and hack the lycanthrope until its blood paints the floor, the walls, and my clothes. I progress and find a mob of angry villagers, all in various states of transformation into beastitude. I slay them by the ones and twos. I get cocky and run into a clearing where about twelve are watching a monster burn at the stake. I'm overrun and demolished with blunderbusses and pitchforks. I die. I return. I kill. I die. Repeat.

That's the game. Except it's not as boring as that sounds. Somehow, it's incredibly addictive.

To me, the game is the spiritual successor to the golden Castlevania games of old. You're an agile warrior, alone on a gothic frontier, clueless as to what vile threats lie ahead, each more likely to rip out your soul than the last. Your enemies are abominations. Twisted humanoids, monstrous apparitions, mutated beasts. It's hard, just like the NES titles. For that, frustration is amplified... but so is your sense of accomplishment when you finally manage to slay the Blood-Starved Beast. Or Father Gascoigne.


The setting is a Transylvania-esque town at dusk, with sharp spires, tight alleys, piles of caskets, rust-colored clouds rolling over a fiery sunset. As you progress, so does the night. Eventually the full moon shows its face. Now, upon streets where once stalked maddened villagers, stand ghouls, silhouetted against the pale moon, able to kill you with one stomp. Where eerily-tall clerics shambled wearing wide-brimmed hats and dead eyes, the streets have grown silent, blanketed by the shadow of an enormous void beast, perched across the steeples of the cathedral like a great spider.


All this game lacks to be one of the best Castlevanias of all time is Castlevania's soundtrack. Especially the Bloody Tears theme from the previous titles. Or Smooth McGroove's rendition. Or Jonny Atma's rendition.

Arghh, can you f-ing imagine?!

I'm going to play it now.

Email ThisBlogThis!Share to TwitterShare to FacebookShare to Pinterest
Labels: gaming