My debut has officially launched and is currently for sale through various vendors, such as Amazon and Barnes & Noble.

Sky Island Publishing - In its current form, it doesn't need its own individual site. A page on Silexare.com will suffice. It's here that I will hopefully deposit title after title after title...


The Silexare Compendium - This is the one I'm the most stoked about. Fantasy lore and illustrations. I'll be adding new entries and uploading art frequently.

By the way, here's what I'm taking to Dragon*Con

I promise it'll be more done/organized/professional by then... maybe. The truth is, I'm not there to sell stuff. I'm there to represent and introduce Silexare to whomever might listen.

Throughout Dragon*Con, connect with me via Facebook or Twitter to stay up on pictures, signing-booth guests, and to get a general idea of where I am / what I'm doing at any point!

I hope you guys have a good weekend!

In November of 2011 I began writing an outline for a story. December 27th I wrote the first words, "Deep in the forest..."

October of 2012 I began to follow the method I'd learned. The generally accepted one. I queried a lot of agents, asked them to have a look, to consider it, to give me a chance. Because that was how to get a book on my bookshelf. That was how to get Silexare alive.

The agents weren't interested. Some sent automated emails saying "No, thank you" a couple weeks after I'd poured out my heart to them. One or two actually typed the rejection emails out. The majority never acknowledged I'd attempted to contact them.

I wondered what I'd done wrong, what I was doing wrong, why I couldn't just get a bite. I considered maybe changing the story so they'd like it better. Surely I could do something they'd like. Maybe it needed more romance or a love-conflict. Maybe I should change the sex of the main character. But what if they still didn't like it? Should I give up?

That's how I spent a year of my authorial career. Then one day in October of 2013, I had a quiet, peaceful, volcanic-eruption of an epiphany.


My dreams are my own. Their dreams are their own. Stop trying to merge the two.

About ten months later, on August 11th 2014, I pressed "publish" on Amazon KDP. This was almost three years after starting writing. Almost twenty years after the first time Silexare crossed my mind. But this epic occasion felt a bit empty.

I mentioned it to a few people I'd done it.
"Congratulations!" they said. But I was numb.
"How does it feel?" they asked. I felt exactly as I did before. Exhausted but with work to be done.

I trudged through IngramSpark's process. It was frustrating and complex. I put together a cover, front and back. Went through the entire document, adjusting spacing, headers, chapter titles, illustrations. Finally I got my file uploaded. I pressed "publish."

This time I didn't mention it to anyone. And I'm sorry. Some of you have been waiting a long time to hear about this.

Still it felt weird. I still had (have) a ton of work to do. Website stuff, pledger prizes, artwork, promotion...

But today (written Thursday, Aug 21st),
I pulled into my driveway from work. On my front porch was a box. I had a good idea what it was. I went around back and let Jax out of the pen. Got the dishes out of the car. Waited for Bray and Simon to get home. Then I went and looked at the box. It was pretty banged up. There had been options to have it sent first class or with special accommodations. But those were more expensive and frankly, I'm scraping the bottom right now. So I brought the box inside and opened it slowly while Bray watched from the blue recliner.

Here's what was inside. 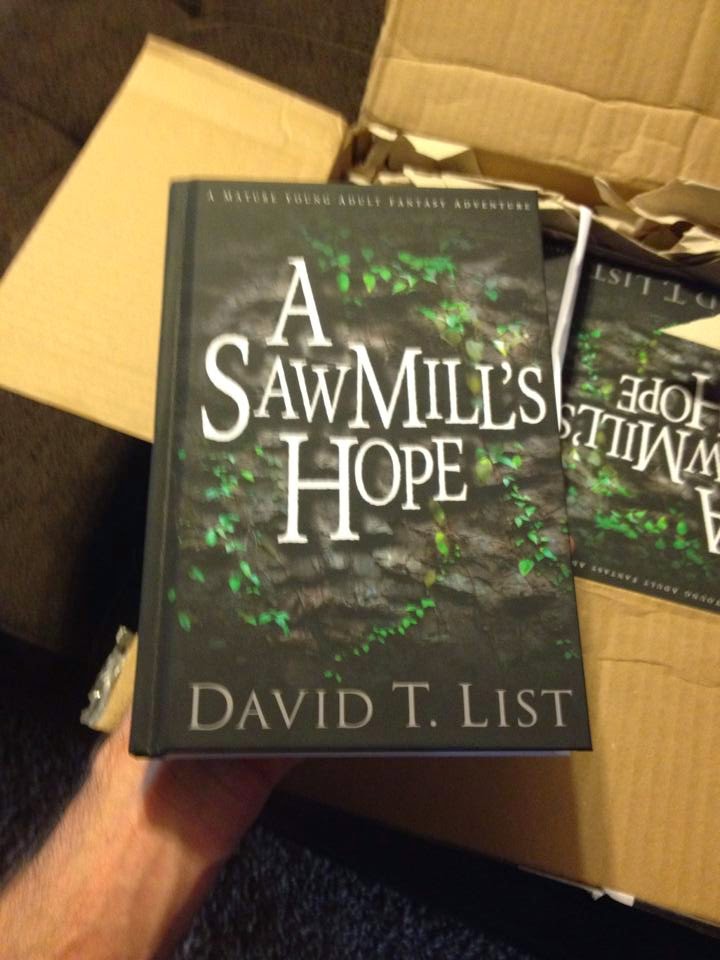 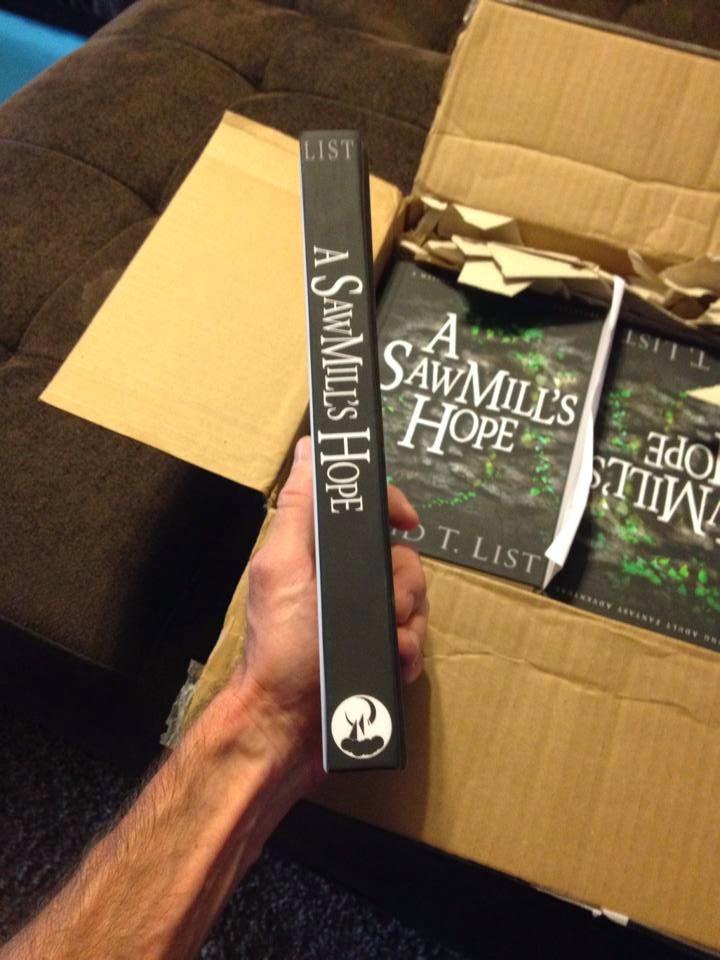 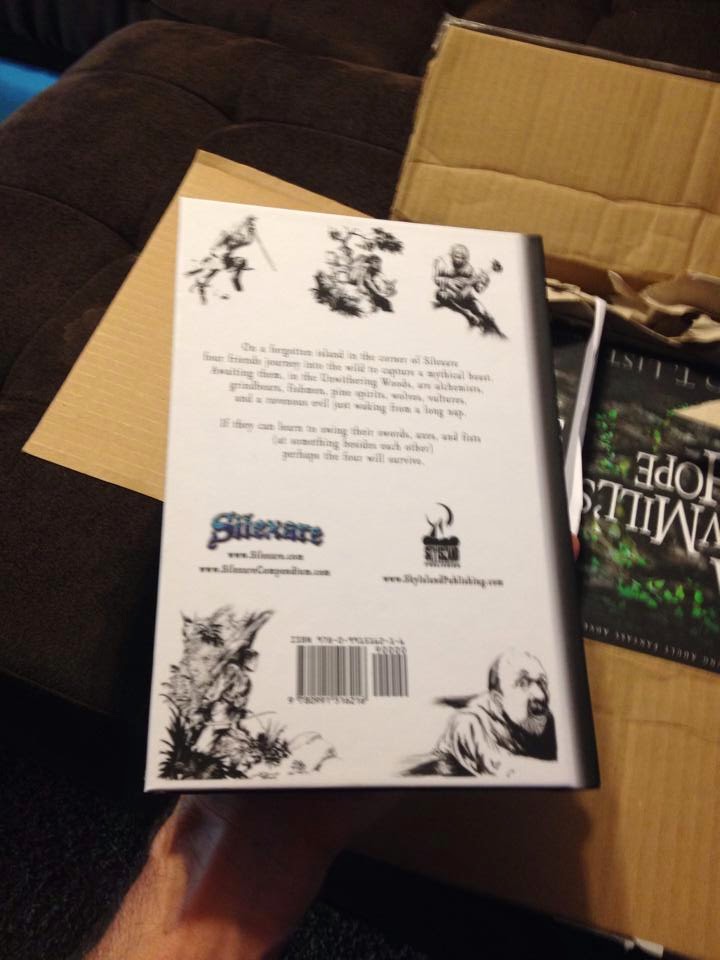 To all seventeen agents who told me no or ignored me entirely, (and yes, I consider seventeen a lot. It's a hell of a lot more than I should have ever queried) I'd like to say two things.
First -

This is all I wanted, you mother@#$%ers! Was it really too much to ask?

Secondly, and most importantly -

Please allow me to offer a word of advice for those of you who are where I was:


Just get up and go put a book on your bookshelf.


For all of you who've already put a book on a shelf (whether virtually or physically, traditionally or independently)


Congratulations!
You have made a permanent mark on literature that NO ONE can ever take away from you! I hope you loved every bit of the process as much I did and I hope for your sake, for literature's sake, and for your fans' sake (no matter their number) that you do it again!


This is very poor self-promotion, I realize. That's ok. Self-promotion isn't my intent with this post. I just want you to know what I had to learn. There are options.

If your intent as an author is something besides what I mentioned above, and you're interested in the traditional publishing system, I'm not judging you or encouraging others to judge you. It's just not for me.

The state of ASH! 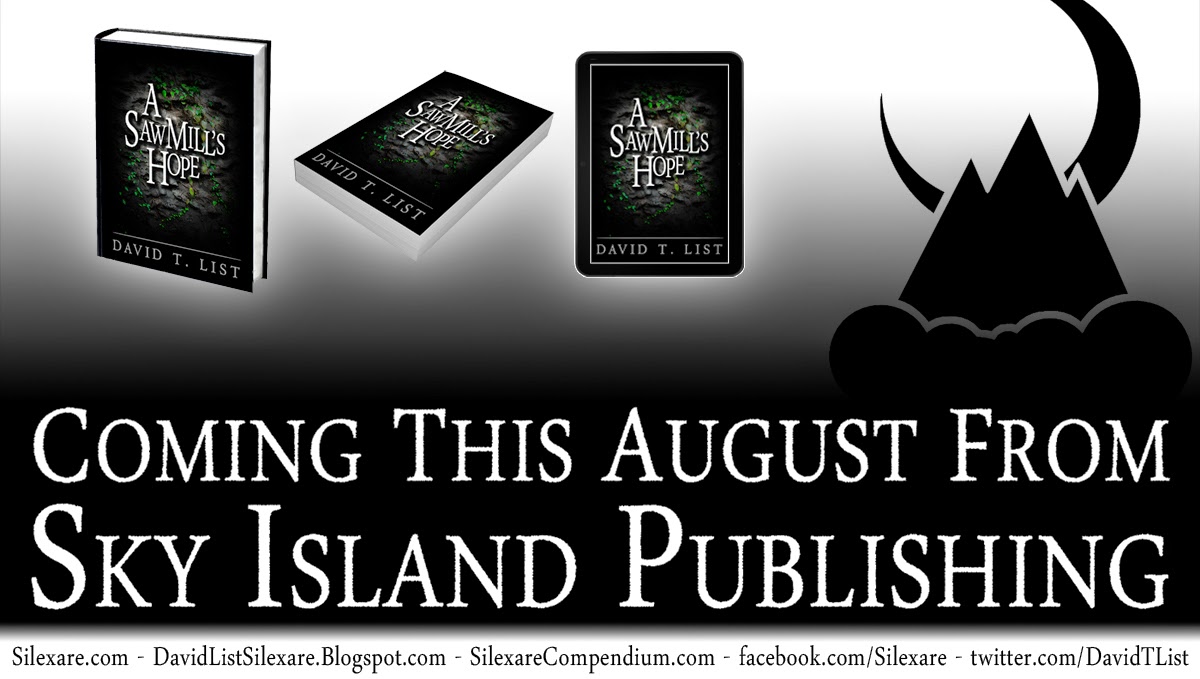 The picture says it better than I can!

Here's a detailed update, copied straight from the latest message to the pledgers (AKA, the Silexare Army)

Ebook - I had originally considered formatting the book to several formats, for all the various stores and platforms. Then I became aware of a handful of key factors that changed my mind. 1. If you own an electronic device, you have access to Kindle 2. Kindle is the single largest distributor of ebooks, anywhere. 3. If I can narrow the learning curve down and convert to a single ebook format, everyone gets their book quicker!

That said, A Sawmill's Hope ebook will be available via Kindle devices. If you don't have a Kindle, there's a free app for your PC, MAC, Iphone, Android, or tablet. If you're the individual keeping Nook in business, and would prefer to read it on your (the last remaining) Nook, fear not. I have a solution for you, too.

If there's another device on which you'd like to read A Sawmill's Hope and no other means is available, I can accommodate you. Trust me.

Physical Book (hardcover, softcover) - While I'd like to throw a single, brilliantly orchestrated launch and infiltrate every orifice of the literary world simultaneously in a glorious penetrata Silexari trifecta, I am but un hombre, with only dos handos. And since I don't have the marketing muscle of Simon & Schuster, Penguin, Hachette, or any of the other crumbling behemoths, no one would notice anyway. (This is ok. The truth doesn't hurt so much unless it catches you with your pants down. And I don't wear pants unless I simply have no choice.)

So as soon as my educks are in a row, I'll be blazing the lines of Lightning Source / Ingram Spark and get youse guys' books printing. 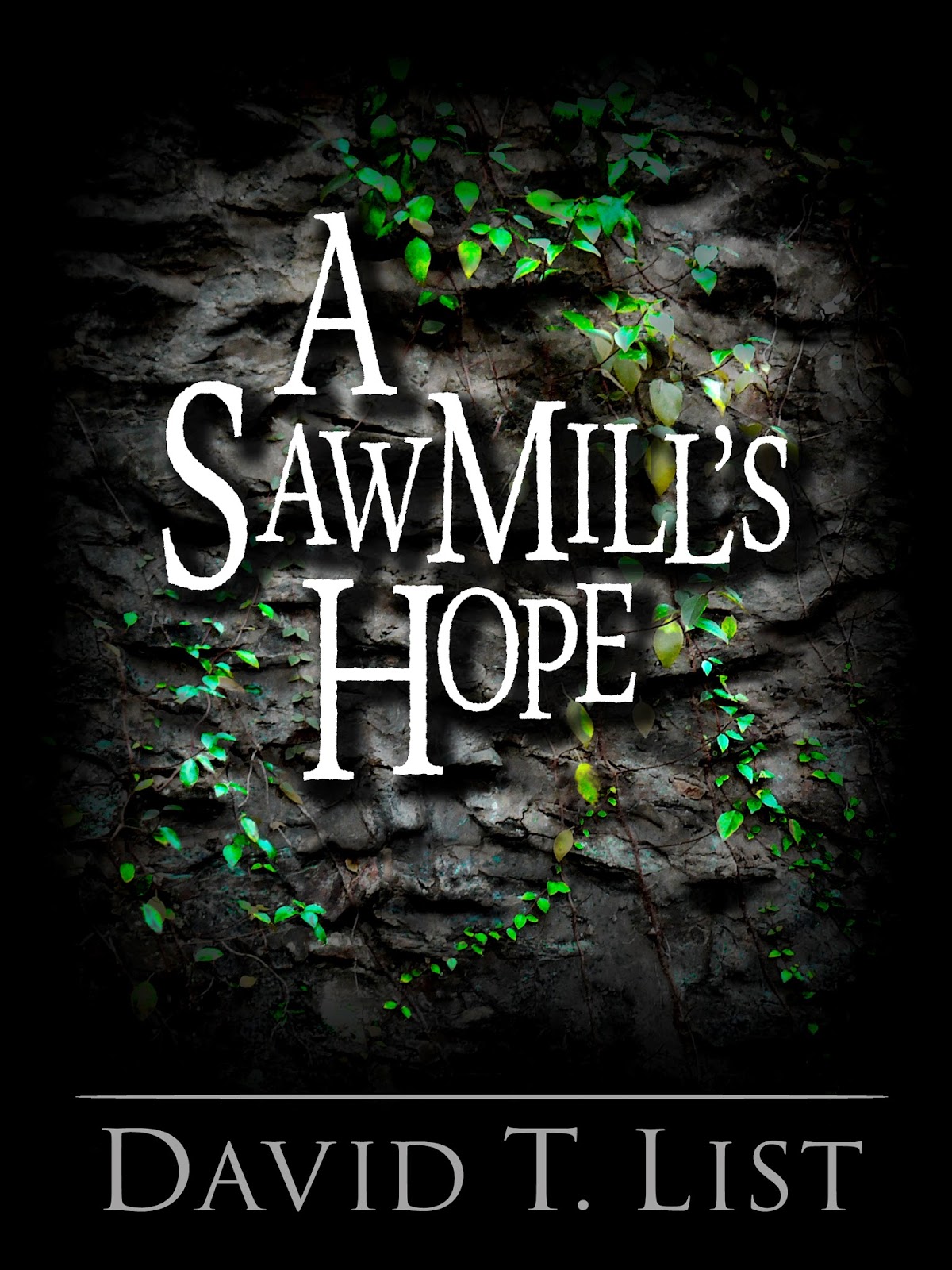 I've been keeping the Kickstarters informed with private updates but from this point forward, I'm probably going to document the completion of the other prizes on my blog, despite that only a select few are receiving Silexare schwag this go round. I just want to share the experience. Who knows, you might realize you have enough (or can produce enough) exclusive intellectual property to launch your own crowd-funded event.

Art - Map is done and printed. Cover is done, soon to be printed (within the week). Prints of Tracy's work are in hand, soon to be printed (also within the week). FIVE computer wallpapers are done, five to go (I'm getting a little crazy with these.) These will double as marketing devices in the weeks to come. The signed, rough, and original inks from Tracy are on their way to me via snail-mail (and you have no freaking idea how stoked I am about that!).

Music - The SoS albums are near. I just have to go down the road and pick them up. I wish I could make that sound more shady... The DL exclusive albums are 75% mastered and ready to go, just needing to be burned to CD.

Now I have one more bit of news regarding August and I'll let you get back to your lives... 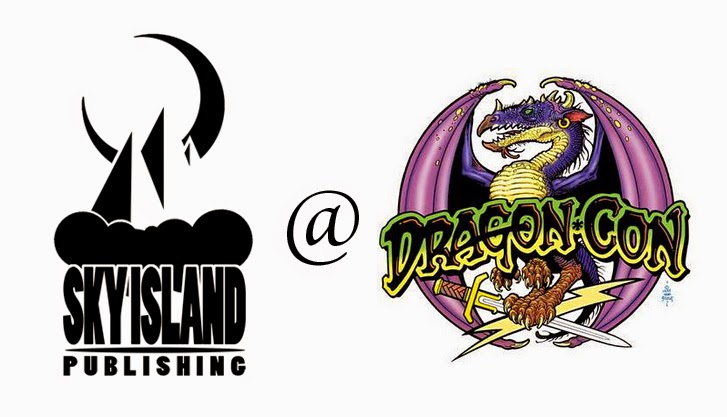