For a while when I was a kid, cards from Magic: The Gathering were some of my favorite things. Playing the game is fun but isn't necessary to appreciate the cards. The best cards have a whole story inside.

If you don't believe me, have a look.

Reya Dawnbringer. Her name provides a hint of her purpose, her strength.

We know Reya is of Good alignment because not only does she require white magic to cast, but she revives a creature every turn... And she's an angel, it says it right there.

Examining her picture gives us more of the story. She's armed, winged, and somewhere between a fiery sky and a fiery earth. There's a battle going on.

Then there's the quote. And that's what grants her voice.

"You have not died until I consent."

No contractions. As if she's from an older time, and yet it's not cumbersome. Spoken with authority. This is no question. "Get your carcass out of the mud and get back to fighting!"

When I would buy a new pack of cards as a kid, I'd spread them out and look for only the cards with a quote. I always wondered but never knew where I might read more of the stories in those pictures. Their world seemed awesome.


I've had an idea for the Silexare Compendium for a long time. I wanted it to display some entities of my stories and of the world of Silexare and eventually have things interrelate and become a web of information, vast and complex. But I wasn't sure of what details to spill... What info to reveal and what to hide. And I knew one thing for sure - If I make a website with a bunch of fantasy names and blocks of written text, it's going to bore anyone to sleep. (Yes, I'm well aware of the irony...)

Drew Cochran and I started the site a couple of weeks ago. I told him ideas and he wrote code. I looked at what he wrote, was impressed, and gave more ideas. Sometimes he'd tell me a better or quicker way of doing what we wanted to. Sometimes my demands involved him broadening his programming horizons.

It's still a work in progress, but here are a couple of images of the site. And please know, the main strength of the page is in the database behind it, with every entry of every table tied to another.

Upon launch, entries will consist of people and places and beasts that are referred to in A Sawmill's Hope. I don't know how many entries there will be. But there will definitely be a bunch of art. And although the Art page, for the time being, will belong largely to Mr. Tracy Flynn, my goal is to open the page to other artists to contribute as well. I want to awaken creativity in my visitors.

When I saw the following page, complete with images, description, and a quote, I had an epiphany. 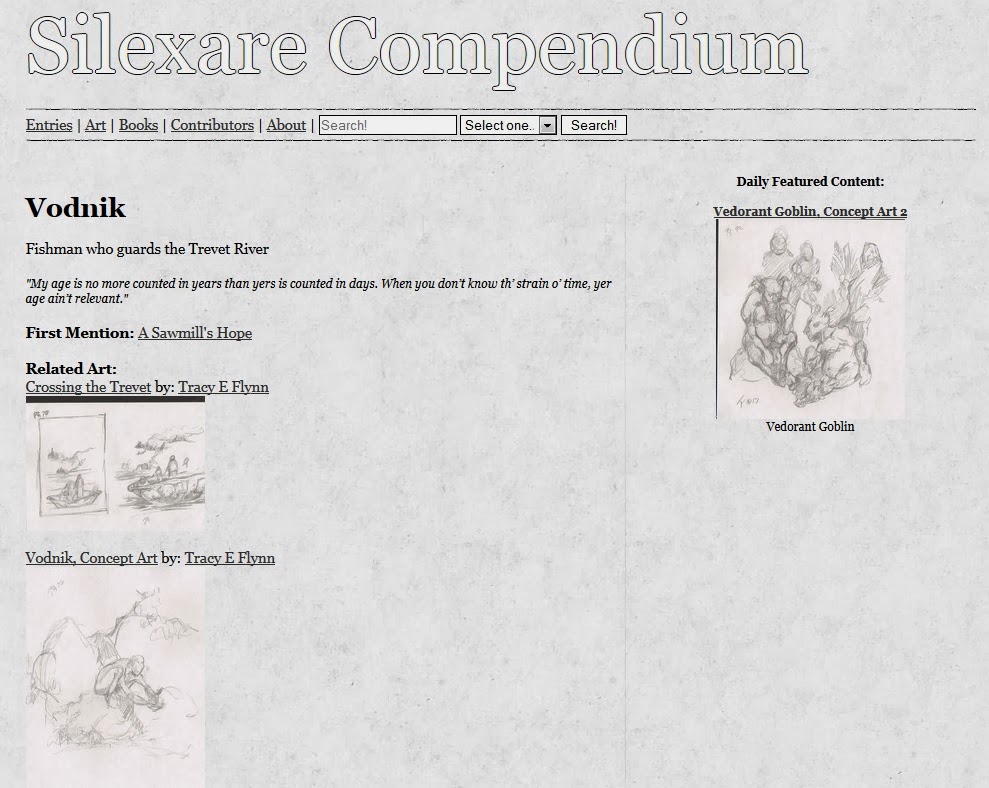 Yes it's still a bit rough. But if you were paying attention to the first half of the post, you'll understand why I was subconsciously drawn to this design. It mimics the Magic cards I used to love. Except now I can click Tracy's name and see all his art on this site! It says where the quote is from right there beside "First Mention" and all art that's been submitted on Vodnik is there for me to peruse!

But if this website is able to stir up a creative desire in just one person, then I've done some good.