I can't describe how stoked I am about this. I've been holding back introducing him and I honestly don't know why. I guess maybe because it seems too good to be true.

So here's the skinny - In middle school my art teacher's name was Mr. Bennett. Yes, he has a first name. No, I'm not telling. Just know it's a good one. So I saw him on Facebook and I friended him (because that's a verb). Anyone who teaches art is a cool mofo as far as I'm concerned. Plus, unlike a lot of Fabo, he has real stuff to say.

One day, while procrastinating on the ol' Farcebark, I see a post by Mr. Bennett on a piece of fantasy art. I follow the art to the artist, Tracy Flynn. And I dig his stuff. Because it's awesome. So I says to him, I says, "Maybe one day I proposition you for fantasy art." And he says, "Do it."

At the time I didn't have a plan, only free-floating desires... obscured by time... too murky to make out in any clear detail. But, as some of you know, recently my plan solidified... Like the tip of some great, sunken ship, rising to clarity from clouds of shimmering algae as the cinder block at my ankle drags me toward my inevitable destiny. Which is - self publish, do a Kickstarter.

Why David, wtf are you trying to say?

Tracy Flynn has agreed to come on board as the illustrator for my (as yet, title-less) novel. He's agreed to sketch 20+ illustrations, one per chapter. This will be funded by the Kickstarter that I plan to launch in the next sixteen days. And if the Kickstarter fails, all is not lost. This train is moving too quickly to be stopped.

I'd like to give you a sample tasting... just the tip for now.

When I gave Tracy the manuscript to consider taking the job, he said he was motivated to sketch from page one. I can think of no greater compliment, no clearer sign.


And my personal favorite thus far... As if validation was still necessary. 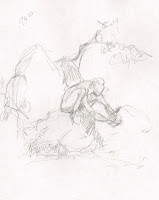 You can see why I'm stoked. What Tracy's pictures add to this story is beyond measure. Despite that most of these are still in their caterpillar stage, they've already taken me back to when I was a kid, mesmerized by artwork of other worlds. Only now it's my world. And it's coming alive.

Thank you for stopping by and having a look. Go to Tracy's art page on Facebook. It is a diamond in the rough, indeed.

Love you guys. Can't wait to share this with you.