(I've been incubating this post as long as I care to. It is what it is.)

We all have something lurking over us, breath murky on our ear, claws trembling in anticipation of flesh.

At best, this temptation wishes no greater harm than to delight us, but in a derailing fashion - choosing chocolate over the workout video, watching tv shows instead of writing, playing video games instead of parenting.
At worst, giving in would be unhealthy, immoral, illegal.

That said, discipline means something different to everyone. But it seems to always be the harder choice. The endless struggle. It starts the moment you become conscious that your actions are your own (which is later in life for some of us than others) and doesn't end until you exhale for the very last time.

Like gasoline to every automobile you've ever owned, tension is a universal solvent. That's why conflict is necessary in a good book. There's comfort in discomfort... because pain is relative. The smartest writers convince us it couldn't get any worse. And so, while reading a good book, our problems pale compared to those of our hero. We're comforted by how easy we have it.


A good lesson for writers, especially us nerdy, world-building, fantasy sorts, is that tension is key. We've all played video games where innocent music trickles from a sunny, blue sky and our chief concern is smashing all the pots to find rupees. And so when we attempt to translate that joy to the page, in all its neutered comfort, we overlook the most important subcutaneous inevitability: The  world's going to end if something isn't done!

When an author can sneak a whisper of unease into every burst of laughter, every tulip's shadow, every whistled tune, she's written something magical.

Though I have only my own experiences to rely on, I believe the people who don't understand the language of tension are those who've forfeited all discipline, given up any control over their lives. They're the leaves on a breeze (not to be confused with a leaf on the wind), the constant victims, having long since forgotten their own identities. Consequences no longer register because nothing's their fault. The world ended already and they'll be the last to know it.
If this refers to you, know that I'm not condemning you. There's a very real place for you in my books. It's just not the most flattering.

Are you able to weave your personal struggles and temptations into your craft, whatever it may be?
Considering that this post is 100% rambling, I welcome discourse to convince me I'm wrong on any point I've made herein.

They say, "Write what you know." We all know struggle.

Into my process - A Sawmill's Hope

My work consumes my thoughts. And by 'work' I don't mean what I'm currently doing for a living. I mean life work. So I figured I'd share it with you. After all, my blog is nothing if not a personal challenge to write until I'm out of secrets.
If that involves including reference materials (ie. map, synopsis) that are spoilers to my current work in progress, let's just call them appetizers, shall we?

After all, we're told our whole life not to spoil our appetites by eating before dinner, only to find out that grown ups do it so frequently there's an entire section of menus dedicated to it! 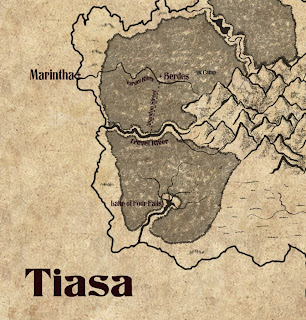 Darke and the Parandrus
I finished the 6th draft of this one year after starting it. Then I queried it to eighteen agents. This isn't a lot by any means. But I was too excited about my next book to keep up the grueling querying. Just because a man would make a great lumberjack doesn't necessarily mean he likes to dress in a tie and sit in an interview. He just wants to cut down trees!

So I left Darke on the shelf, assuming I'd come back someday. Then several things happened. The going got tough in book #2 (poor excuse to put it down but we're being honest), I read the First Law trilogy (which, in case I haven't mentioned, changed the way I look at literature), and an up-and-coming publishing house opened their doors for unsolicited book submissions (through October of this year unless I'm mistaken).

These three details turned out to be exactly what I needed to crack the dusty cover of Darke's story. And after six months on the shelf, it was dusty indeed. I read an excerpt, slack jawed, flabbergasted I'd ever asked anyone to test read it, ashamed I'd ever been proud to call it my own. The weakness was the story's voice, or lack thereof. It was all telling. I had no grasp of emotion save what was spelled out for me. If this had been someone else's book, I'd have thrown it.

Please understand I'm not being negative or pessimistic. It's absolutely healthy that I felt this way. I'd grown in those six months, as a reader and a writer. My standards were higher. And if I'm lucky, they'll only continue to ascend. Our personal best is only limited by the amount time and work we're willing to put into something.

So I decided to rewrite it. And this is how:

I took the five point of view characters and singled out their parts. Then I began to rewrite them one at a time. Completed are Aedron (whose viewpoint makes up 8% of total book) and Tahkaan (11%). In the works are Brandal (27%) and Darke (44%).
Lastly, of course, will be Recher.


The advantage of this is that I'm able to get deep into one character's head and follow his personal journey the entire trip through the Unwithering Woods. For each character to have a unique voice, I had no choice but to do this. And it's working so well, it's a technique I'll resort to again, for sure.

My friend Volker asked if I'd look back at the story a year after the rewrite and consider it garbage once more. In a way, I hope so. It'll only make it better.

Email ThisBlogThis!Share to TwitterShare to FacebookShare to Pinterest
Labels: a sawmill's hope, writing

Wow, it's been a long time since my last post.

But I've been writing nonstop. I've picked up my first book once more, the one I started about 20 months ago. I finished the 6th or 7th draft of it around November of last year and started querying. Got one full request. Then I let the book rest for about 6 months, while working on the second. But after reading some fiction that changed my way of writing, I decided to rewrite to the first. I'm about 72% done.

The story was never its problem, more like the way it was told. And I do mean "told." There was no emotion in the characters, no motivation made apparent. It's written tight third person, ideal for when you're alternating viewpoints (five in this case) and you want to truly captures their struggles. But my first attempt failed at bringing out the characters.

I'm pretty sure I'm closer than ever to understanding how to capture the characters' struggles. You have to suffer alongside them. And this requires really getting to know them which, for me, only happened after half a dozen drafts and then a waiting period.

This post isn't quite so insecure as my last. But I'm sure there's some insecurities buried herein... Like, "What if I do all this work and the book still isn't good enough?" "What if the best I can make it still falls flat to those who read it?"

I guess the answer to any question such as these is the same. I sat down to write Darke and the Parandrus / A Sawmill's Hope just as clueless as I could be. And over the course of that first year, I read tons of books and articles on writing, watched writing videos, listened to writing podcasts,  spoke with professional writers, agents, editors...

Long story short, if my first book goes nowhere, it won't have been a loss.

What about you? Is your first story destined for greatness or the chopping block? When do you know it's the best it'll ever be? Did your first book get published? Is it everything you dreamed?