Specifically for you writers.  I realize it's not Friday.  If it were we wouldn't be searching for it would we? 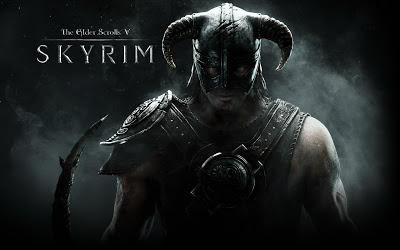 I wrote some yesterday.  Added a cooking scene to Brandal's intro.

I got home and wanted to continue writing.

I used my laptop, so as to kick it with Jantzen in the living room.  He decided to play Skyrim since we weren't watching a movie.  For some reason, My Box wouldn't sync up with my latest files I'd edited on a different computer... In fact, there was no "Brandal edits.docx" whatsoever.

I'll just watch Skyrim and wait for it to sync.

Watch.  Wait.  Watch.  Wait.  It became obvious the sync wasn't going to happen.  I'd have to go to another computer.  But it was already 11 pm and my rump was tucked nicely on a pillow on the floor between the couch and the futon in the write-friendliest pose you could imagine.

I watched more Skyrim, contemplating my dilemma.
Then I opened Word and just started writing.  Here's what came out.

[It's pretty rough. For the sake of this post, it hasn't been cleaned up]


“Hold this.”  Mink handed off several random bits of armor and potions to Lydia.


“I’m sworn to carry your burdens,” she said, not lacking sarcasm in the least.


It’d be better if she just didn’t speak.  Everything she said irked him.


They arrived at the fort.  As predicted, it was overrun with bandits.  The first ran out with a mean looking club, followed by an old brigand with white hair and a wooden shield.  He had a sword but wasn’t quick enough to put it to any use.  Lydia was less than helpful, firing arrows into the group from thirty paces off.


“Could use a hand here!” Mink shouted, downing a potion.  His mace bounced off the first man’s head, laying him down unceremoniously.  A third joined.  He swung a warhammer nearly taller than himself.  An arrow dropped the old man, leaving only the warhammer to worry about.  Mink dodged, sprang forward, finally managed to trip the bastard then bashed his head in on the way down.  An arrow stuck in the ground next to his foot.


“Lydia!” But it wasn’t hers.  The shooter hid behind crumbling stone, fumbling with another arrow.  Mink rolled aside, came up around a tree, dashed forward with a yell, just bringing his shield up in time to block the arrow.  Lydia got to the archer first but had no idea what to do with him.  He’d brandished a dagger and was backing her against a tree.  Mink’s mace made a terrific sound against the side of the archer’s face.


A single swordsman met them inside the fort, shirtless and roaring.  His greatsword swung windmills around the room, scattering chairs and sending Mink diving for cover.  Lydia got a lucky shot with her stolen dagger, exposing one of his ribs with a swipe.  Mink let the sword bounce off his shield, nearly breaking his arm, and stuck his mace in the man’s groin.  The swordsman hunched and Lydia’s dagger thumped into his back.
The fort was as Mink had expected, rough-hewn wooden furniture - barely more than functional, stale bread, dusty sacks of seed or rice, rusty weapons, poorly tanned furs.  In one room, a large hall with arched wooden supports overhead, was a wide table with a map stretched across.  It had handwriting scrawled here and there, maybe some kind of a plan of attack.  More likely an ambush.  A chest sat tucked away beneath the table.  Mink had Lydia stand at the doorway as he picked the lock.  Inside were Orcish weapons and a pouch full of gold coins.  He took the gold.

I went back and read this and was a little bit delighted.
No, it has no instrospection, no buildup, no dialogue, no plot, no arc, no romance, and very little setting.  It's action only.  But what it taught me in a matter of five minutes, was immense.
It taught me how to differentiate foes while writing action.
How to account for several characters at once.
That it's ok to mention a shield and it do no good whatsoever.
That we're watching from Mink's POV and we aren't supposed to know what Lydia's doing moment to moment, or what the other bandits are doing or how many are left...

And if an action scene in a video game could show me this, what could I learn from a funny scene in a comedy or a tense scene in a thriller or a scary scene in a horror movie or a romantic scene in a romance?

Have you ever watched TV and attempted to transcribe what you're seeing?  If not I challenge you to.  It's better if it's something you can pause.  If you aren't a TV or movie watcher (or even if you are!) maybe find a window and just write what's happening in the world, filling in the details that aren't forthcoming.  When you can't work on your story in progress, what do YOU write?

Excuses.... and promises of things to come

I've slacked!!!
I'm sorry.  I missed DL Hammon's WIP it blog! (which I signed up for)
I missed contributing and participating in this month's IWSP! (which I've also signed up for)
And I missed my own 'Finding Friday' post!  (of which there are but two lonely installments!)

In my defense - and I hate making excuses! - My wife, Simon and I are on vacation on the other side of the country.  In case you weren't aware, our home is deep in the woods of northeast Georgia, in a NORMAL time zone.  Well I'm writing you now from the Sacramento Valley of northern Cali, cradled beneath the golden foothills of the Klamath and Sierra Nevada Mountains.

And so my schedule and our days have been anything but routine.  But I'm going to get back in the swing soon and come see what I've missed 'round the sphere and hopefully give you guys some pictures to look at... hopefully in the form of another installment of The Refresh Button.  (I am on vacation until then... as much vacation as one can be on with a two year old three hours off his schedule!)

This is just something I've been wanting to share with you fellow writers.  I'm sorry for leaving out you non-writers today.

Writing high fantasy, I try to invent new names as often as possible for my characters, monsters and locations.  Occasionally while I'm thinking of - or writing - a character, their name just appears on the page like POP! and it's perfect.  But sometimes, I can't think of a snazzy name to save my life.  For those situations, here's the tactic I've taken up for my current work in progress.

Think of one word that describes your character - for example awesome, naive, meek, obnoxious, etc.  Go to Google translate and translate the word to a different language.  My favorite languages to use are currently Finnish, Latin, German, Spanish, Portuguese, Swedish, and Norwegian.

For one of my characters I entered the word "Pure" because out of every character in my current story, she's above reproach.  The results didn't come back with anything that stood out so I tried "Chaste".  The first result in Finnish was "siveä".  I loved it.  She became Syvea.

~
Adenhelm, the lake of lava where human sacrifices are thrown, came from two words.
Aden - Ahnden is German for punish or avenge
Helm - Holm is Norse for island and Heim is German (and Norse) for home

~
Fohrvilda, the nation run by barbarians, was pretty simple.  Feral translated to Swedish is Forvildad.

~
Kaedheim, the arena where prisoners of Fohrvylda are forced to fight to the death, was pretty straight forward too.
Kaed - Caed is Latin for murder
Heim - Norse for home

~
A little bit backward from this is the island called Redemier.  The name sounds a bit grim, whether you pronounce it 'Red-eh-mire' or 'Reed-mier' and it should sound grim, the island is forbidden.  To step foot upon it is to die.  But the name came from
Vrede - Peace in Dutch
Mier - Peace in Slovak
In this case, the name is a bit of a spoiler, but only to a select few... I find this cool.

One reason I leaned so much toward Norse, Finnish and Swedish for these names is that a lot of the setting of the story takes places high on frigid, unforgiving cliffs over a violent sea.  The languages are only fitting.

The brilliant thing about this is that sometimes you'll use words that readers recognize, be it consciously or otherwise.  This can add depth to the characters and locales.

After you've settled on a name, I suggest doing a Google search on it.  It's a good idea to be aware if the name you've chosen is already in use or has negative connotations.

Do you have a name generation system or do you just "pants" it?  Do you fancy the idea of learning another language one word at a time??